I swear I have three children sometimes. Not just the two that I gave birth too, but the one I married as well. A lot of women feel like this right? (Please tell me I’m not alone here.) I will preface this rant (because that’s exactly what it is, a bitch session) by saying that I love my husband dearly; he’s a great dad, provider, companion, and any divorce threats that may be made in a moment of anger or frustration are totally not serious. Like I said, I love him dearly, I just don’t like him very much right this very second, and here’s why.

He is my “other” child! I kid you not, I find myself having the same disagreements and being frustrated for reason that are very similar to those that cause me to want to run away to another country with my 11 year old. They have many very similar qualities. They’re both messy, unable to hear you speak when the television is on, and they team up to justify buying the same expensive toys. Unfortunately, on the flip side of that, my husband disciplines our son for the same exact infractions that I just witnessed the man child commit two seconds prior. I totally agree that the discipline was warranted for the 11 year old, but now hubby can’t figure out what I’m irritated with him! Really? Ummm, excuse me, but you just did the same exact crappy thing the kid did. Get it? 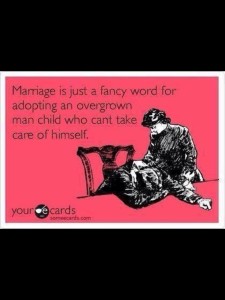 Anyone else have this issue? At what age do they fully grow up or has anyone’ significant other of the male species reached that point yet? Do I continue to have this argument or do I just consider this a losing battle and move on? I’m a firm believer of teach by example while he’s a do as I say not as I do type of guy – what exactly is the middle ground on that one? Does it really even matter when tomorrow they’ll both be playing video games, tuning me out again, and wondering why I’m such a bitch because I got pissy when neither one of them acknowledged my existence after I asked them take out the trash for the fiftieth time? Probably not….

Who's excited for the new Star Wars movie? … END_OF_DOCUMENT_TOKEN_TO_BE_REPLACED

Online business is quickly becoming the order of … END_OF_DOCUMENT_TOKEN_TO_BE_REPLACED

Image by Bianca Mentil from Pixabay  If you're … END_OF_DOCUMENT_TOKEN_TO_BE_REPLACED