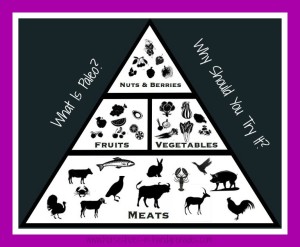 Do you know what Paleo is and why it has become such a popular diet lately? I’m going to be honest here, I feel like I may be the last one on the bandwagon, but I didn’t have a foggy clue what Paleo really was until I sat down and researched it…yesterday. I know, I must not get out much right? However, since Paleo has apparently become all the rage and you can’t talk food period without the term coming up, and I’m always looking for ways to keep my family happy and healthy, I figured I may as well do my research and get in the know! So for anyone that was like me (it’s okay you can remain anonymous, I’ll be the ignorant one) and had no idea what this cool new diet trend was, here what I’ve discovered.

First off, evidently Paleo is not “new” at all. In fact it’s one of the first diets known to man…the caveman diet as it is often referred to. The whole point of Paleo is to structure your diet to mimic the way the O.G.’s used to eat…basically only things that you can hunt or find. That includes meats, fish, nuts, and greens. Those yummy carbs have to go, along with things like candy, cookies, and chips. Holy cow! That’s craziness right?

Yes it sounds pretty strict and for a food lover and Oreo junkie like me, Paleo would definitely be a major life change, but there are some perks I’ve discovered. For one, you can give up calorie counting, one of the reasons I fail miserably at just about every diet I attempt to follow. With Paleo the number of calories you consume becomes less important because all of the calories are healthy. Also, have you ever seen a fat caveman? No! Now I agree that a lot of us live a more sedentary lifestyle than your typical caveman, but you have to think diet had to have a lot to do with it too.

Another big positive of trying to follow a more Paleo based diet (notice I said “try” so as not to set myself up for failure) for me personally is that I think it will put us a step ahead should we ever face a true “but out” situation. Now this may not be a huge factor for a lot of people, but my family is really into preparedness and survival. If you really think about it, getting your body used to a Paleo diet beforehand would be one less stressor should you ever be forced to lead that lifestyle.

Finally, Paleo is an awesome, healthy, diet for pretty much everyone, but especially for people that suffer from things like gluten intolerance, lactose intolerance, and autoimmune disorders. Now there are plenty of other pros to following a Paleo diet if you believe all the literature out there, and aside from giving up some of my favorite things like pasta, bread, and Oreos; there aren’t a lot of cons it seems. I have also found that there are some Paleo friendly recipes for those lovely breads and pastas that use ingredients other than grains as a substitute so there’s that possibility too. I think the only way to really see what Paleo is all about and if it could work for my family though is to try it.  If you want to find out more along with me and give Paleo a try, feel free to follow my Paleo Board on Pinterest where I’ll be pinning information and recipes that I find.

What do you think about the Paleo trend? Do you have any great recipes that we should try or know of any links to awesome Paleo information? Let me know in the comments below and thanks for reading!

Dealing with a chronic pain problem can be really … END_OF_DOCUMENT_TOKEN_TO_BE_REPLACED

Thank you to Nature’s Harvest®  for sponsoring … END_OF_DOCUMENT_TOKEN_TO_BE_REPLACED

The beginning of a new year usually … END_OF_DOCUMENT_TOKEN_TO_BE_REPLACED