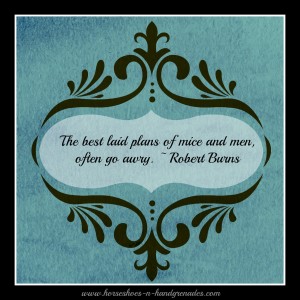 In case anyone was wondering, I spent yesterday trying to be hyper-organized for the upcoming weeks. I’m pretty organized at work and with my blog, but when it comes to the house and family, it’s kind of a system of getting people where they need to be hopefully when they need to be there, and hoping the house gets cleaned up and meals cooked when time allows. We don’t starve or live in shambles (usually), but there’s definitely no method to the madness. I really do try and I have the best of intentions, but life just always kind of has a way of messing up the schedules I come up with. So, anyway, yesterday I decided that today was going to consist of some very specific activities so that I can give this organization thing one more shot: house cleaning, meal planning, laundry (including getting it all put away), and one big shopping trip to load up on stuff that I need to follow the meal plan for at least the next two weeks. Honestly I was very motivated and pretty excited because I just knew that this time it was going to work, everyone was going to be on board, and things were going to start getting more routine. Boy was I wrong!

What could have happened in the last 12 hours that basically blew all the planning in the world out the window you ask? Well, let’s start with snow. Mind you’ve we’ve had basically no snow at all whatsoever all winter long which is very rare for the Pacific Northwest. I think everyone started to think it was passing us by this winter, and honestly, I was totally fine with that. But no…not so fast. In the last 18 hours, we’ve gotten over a foot of snow. It’s pretty much stopped for now, but there’s more expected this evening and over the next few days. Mind you, it was originally reported that  yesterday & last night’s snowfall would bring two to four inches…evidently they were wrong. 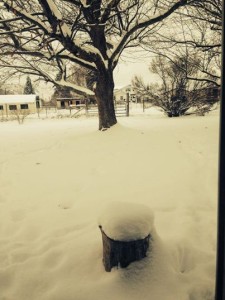 So what’s a little snow? No big deal really, we have two four wheel drives and I was still very determined to make that big shopping trip and follow through with my master plan. Then it happened…hubby started out saying he thought he had heartburn and ended up hurling all over the bathroom…and by all over I mean, floors, walls…you get the picture. I felt horrible, because I’ve never seen him get so sick so fast and it was all night long. One the bright side I did get to start on the housecleaning before today because the bathroom required some serious mopping and disinfecting, but I certainly won’t be leaving the kids home with him so I can go run errands today. He’s doing better, but not out of bed yet as of the time of writing this, so you can see where my big plans are beginning to get shot to hell.

By the way, anyone have a snow shovel….I need to clear the driveway and path to the mailbox before tomorrow otherwise we have a whole new set of issues!

Who says gifts are things that you should only buy … END_OF_DOCUMENT_TOKEN_TO_BE_REPLACED

This shop has been compensated by Collective Bias, … END_OF_DOCUMENT_TOKEN_TO_BE_REPLACED

I received a free product for review purposes. All … END_OF_DOCUMENT_TOKEN_TO_BE_REPLACED

Debt is like a monster that hides underneath your … END_OF_DOCUMENT_TOKEN_TO_BE_REPLACED