I would like to thank Mom Central and Sprint for making this post possible. All opinions and my love for technology and gadgets are all my own!

Cell site, cell providers, cell phones…quite the combo right? You better believe it is and I was lucky enough to be part of a small group of Pacific Northwest Bloggers that got to learn about them all. (Okay, well technically they were Western Washington bloggers from the Seattle area, but since I was the oddball from the other side of the hills in Eastern Washington, I though Pacific Northwest sounded better.)  First let me tell you about the cell site tour and what Sprint is doing in Western Washington and the rest of the nation to continually improve their cellular network and capabilities….it’s actually some pretty cool stuff.

First, one of the things that impressed me when we toured a cell site, was that the equipment used to run the network in a particular location, takes up relatively little space. I actually thought that each cell tower you see belonged to a single carrier but I was very wrong. Rather, multiple carriers share the space in each particular tower and as networks and equipment are upgraded, as Sprint has been doing, the space needed at each location is becoming less and less even thought they’re able to continue expanding their network. Mind blown….

This itty bitty cabinet of equipment is what allows your mobile devices to receive cellular data. Talk about a small carbon footprint!

You may or may not have heard that Sprint and their Chief Network Officer, Dr. John Saw, are currently focusing on buildig the best wireless network in the country and we are seeing some of those efforts right here in the Pacific Northwest where I live. The network overhaul though, is really a nationwide effort that has been happening over the past few years. Those of you on the Sprint network may have already noticed some improvements.

I’ll be honest, I have not been a Sprint customer in the past because we did not have Sprint service where we live in Eastern Washington, but I’ve checked again since becoming a #SprintMom, and while the focal area of the network improvements have been in the Seattle/Tacoma area here in WA, even those of us on the other side of the mountains can see the difference. I have actually been able to use the phone I received for review with no issues. The speeds are a bit faster when I am in the city versus at home in the boonies, but I think that is to be expected and the exciting part is that I actually do get service at home even if it is a bit slower…a year ago I did not. I’m so glad that Sprint has put so much effort in to network improvements because otherwise, I wouldn’t have been able to try out a super cool new phone!

I will preface this review by sharing with those of you who aren’t already aware, that I’m a pretty loyal iPhone user. I became a fan when I finally broke down and got the 3S back in the day and have had every model since (4S, 5C, and I literally just ordered my 6+ today). So, that being said, when the amazing folks at Sprint told me they were going to let me check out this phone and their upgraded network,  I wasn’t sure how I was going to do with one of those crazy Androids. There was definitely a learning curve…regardless of the network, Apple iOS is completely different from the Android operating systems so it took a couple of days to learn how to really navigate the device. Once I figured that out, it really was all fun and games!

I’ve said time and time again that I’m not a “techy” in the sense that I know and completely understand all the technical jargon and specs that are supposed to make devices really cool. What I do know though is if something is user friendly and practical for busy moms, dads, kids, and just everyday non-engineer or rocket scientist types. For those that need the details though, here’s what the HTC One M8 brings to the table: 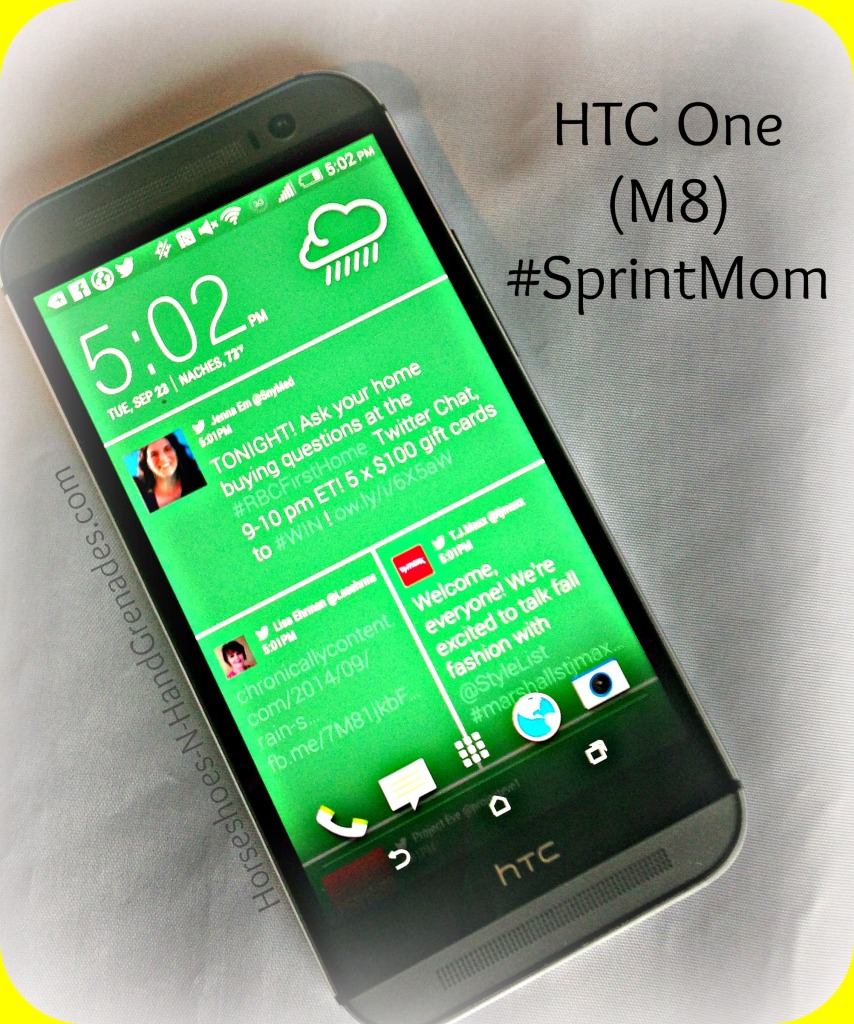 What Could Be Better

Overall, I’m very impressed with not only the HTC One M8, but also what Sprint is committing to doing with their network. I think it’s great that they’re making all of these improvements while staying as environmentally friendly as possible and keeping prices affordable for consumers. That makes it pretty exciting to be a #SprintMom!

Are you a Sprint customer? Do you use an Android device? If so which one? What would you like to see cellular carriers do to improve your customer experience? Let me know in the comments below and thanks for reading!

It’s the season for love and understanding, right? … END_OF_DOCUMENT_TOKEN_TO_BE_REPLACED

Debt is like a monster that hides underneath your … END_OF_DOCUMENT_TOKEN_TO_BE_REPLACED

Most people would love to look down and see a … END_OF_DOCUMENT_TOKEN_TO_BE_REPLACED

Image Yes… we know. It’s only September and we … END_OF_DOCUMENT_TOKEN_TO_BE_REPLACED