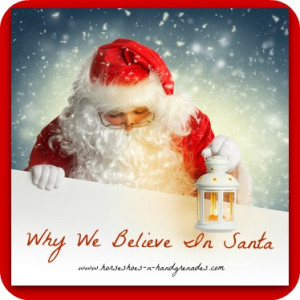 I’ve noticed several posts the last couple of days (and it seems like they pop up every year around this time) about why people do or don’t “do” Santa. I have seen valid reasons to both sides and to each their own. I do not judge or think negatively about anyone who doesn’t participate. I mean hell, there are tons of religions, beliefs, and traditions that I don’t understand so why would I think that everyone else should understand me? I don’t; everyone has their own life experiences that cause them to see the world the way they do. What burns my butt though, is when those who don’t partake because they perceived it as lying or deceiving their children or whatever reason they give, judge those of us that do participate in the tradition. So in the midst of all the lists floating around out there of reasons why selling Santa to your kids is wrong, I thought I’d share some reasons why we “do” Santa, and why I think it’s a healthy tradition for our family. Mind you, these are based purely on the tradition of Santa Claus and have nothing to do with the religious reasons behind the holiday, that is a completely separate matter so don’t jump down my throat when I don’t mention them, I haven’t forgotten. Anyway, here’s why we believe in Santa at our house:

1. In my neck of the woods the kiddos, and I think a large portion of American children, do have some type of Santa tradition during the holidays. That’s not the basis for why I do it, but I also don’t really want my kids being the ones going to school telling everyone they’re crazy and there isn’t really a Santa and ruining it for all the other families who are trying their damnedest to continue long rooted family traditions. Let them be young and have fun and hope and wonder.

2. My kids love it. The excitement on Christmas morning and the anticipation all season long building up to the big day is fun for them and it’s brings me joy seeing them so happy and excited. Is it a little bit self-serving? Possibly, but what’s the problem with that as long as everyone is enjoying the festivities in some way, shape, or form? If one of my kids ever becomes frightened or upset or unhappy with the Santa tradition, we won’t push it, but for now everyone is simply having fun.

3. Some are against “Santa” because all families are not created financially equal. True. Some years my kids get everything on the list, some years not so much. I have found that the “rich” kids are generally not comparing lists with the “poor” kids at school though, and by the time winter vacation is over, “what Santa brought” them isn’t much of a big deal. Do some kids ever feel shafted by the jolly fat man? Probably, and that sucks, but am I going to give up a long standing tradition, and something that brings joy to my kids and family because everyone was not created financially equal? Absolutely not! See life isn’t about being equal, it’s about doing the best you can and being a good person and that’s what we should be teaching our children in my opinion; not that we just don’t play the game if we aren’t as good as or as wealthy as someone else.

4. I grew up with Santa and so did my husband. We loved it when we were little, we learned the “truth”, and we have not been mentally scarred for life as a result. Trust me, the Santa realization will not be the biggest “lie” my child will be told or the biggest heartbreak they will suffer in their lifetime. If it is, I will consider myself very lucky. And the way I see it, the deception about Santa is actually a foundation for teaching a greater, more spiritual lesson as your child matures (see #5).

5. My son, now 11 ½, has figured out that there isn’t really a big guy in a red suite that breaks into the house at night, eats the food, and leaves free crap for the family. He’s okay with that because he has realized that a.) His dad and I love him tremendously to go through all the trouble that it is to keep up the appearances of Santa because as you parents that do partake in this tradition know, it’s not always an easy task! And b.) he’s now learning where the tradition of Santa Claus began, learning about the true spirit of Christmas, giving back to others before oneself,  how Santa does exist in everyone, and it’s not just up to one jolly fat man to keep the meaning alive. This year I think he’s just as excited as in the past because he is able to help us keep the tradition alive with his 2 year old sister who he adores and so far, he’s playing his part in this song and dance fabulously and enjoying her excitement as much as mom and dad are. Now somebody tell me how that is damaging to my child or his development into a well-rounded young man? I hope that as my daughter gets older, she will follow the same path, of finding out the truth, acceptance, and learning about and embracing the true spirit Christmas and giving.

So my friends, those are some of the reasons why we “do” Santa at our house. I’m interested in hearing what you all think about the tradition that is Santa Claus. Do you participate? Why or why not? No judgment here, just interested in everyone’s perspective and reasons behind their choices…I’m always looking to learn something knew or look at something from a point of view I hadn’t previously considered. As always thanks for reading!

There are some improvements you can make to your … END_OF_DOCUMENT_TOKEN_TO_BE_REPLACED 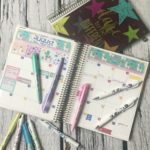 If there’s one thing everybody can agree on right … END_OF_DOCUMENT_TOKEN_TO_BE_REPLACED

Pexels When it comes to needing a little help, … END_OF_DOCUMENT_TOKEN_TO_BE_REPLACED

I pride myself in being strong, and toughing … END_OF_DOCUMENT_TOKEN_TO_BE_REPLACED