If there is one thing that everyone will be doing more often at this time of year, it is enjoying a good old drink. We seem to consume more alcohol at this period of the year, right? So, what better time to look at the history of one of the world’s most famous cocktails. Below, we are going to tell you everything you need to know about the Green Fairy. This is a cocktail that is made from Absinthe. It is a drink that became famous in the 19th century. At the time, it was known as La Fee Verte, which is the French translation.

Of course the main ingredient in this cocktail is Absinthe. This is a highly alcoholic beverage with anything from 45 per cent to 74 per cent ABV. The drink was invented by a French doctor called Pierre Ordinaire towards the end of the 18th century in 1972. He distilled herbs, such as wormwood, in an alcoholic base. If there was such a thing as an alcohol rehab back then, you can be sure a lot of people would have had to go for drinking a lot of this drink when considering the ABV. However, his creation wasn’t intended to be enjoyed as a drink for the purpose of taste and fun. He created this concoction as a remedy for his patients. It was five years after this that Absinthe was produced commercially.

Nonetheless, towards the end of the 19th century, Absinthe was embraced by another crowd. In cafes across Europe literary bohemian crowds would gather and they embraced the Green Fairy as their inspiration and muse. Absinthe steadily grew into a worldwide phenomenon. Of course we have the Blue Fairy at the Blue Butcher – combining the muse of the 19th century with our very own restaurant’s inspiration to create our signature drink.

It was not only Europe that was enjoying everything that Absinthe had to offer, but also the US was enjoying the drink too. Local brands included Milky Way and Green Opal. It was in New Orleans in particular whereby the Green Fairy was particularly embraced. The Old Absinthe House was a bar that was opened here and ran by the Aleix brothers.

However, Absinthe was banned in various countries during the 1900s, including Belgium, Switzerland, the US, Brazil and the Netherlands. These bans were viewed as nonsensical by most people. At the end of the 20th century all of the prohibitions started to be lifted and the world started to enjoy the delights of Absinthe in a whole new light over again! It was like a brand new drink had been created.

I participated in an Influencer Activation on … END_OF_DOCUMENT_TOKEN_TO_BE_REPLACED

If you are thinking about upgrading your family … END_OF_DOCUMENT_TOKEN_TO_BE_REPLACED 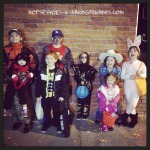 Halloween is a big deal at our place. … END_OF_DOCUMENT_TOKEN_TO_BE_REPLACED

Your hair is one of the most noticeable features … END_OF_DOCUMENT_TOKEN_TO_BE_REPLACED