As a parent, one of the hardest things in the world to handle, is seeing one of your kids in pain. Today started out pretty rough and my heart is hurting for my son. A little background here…my son, right now he’s 12, doesn’t get overly attached to people. He has friends, a couple very good ones at that, so he’s by no means a “loner” or anything, but his emotions are, and have been as long as I can remember, much stronger with animals. All animals, kittens, puppies, chickens, horses, ducks, lizards; it doesn’t matter, if he begins caring for one, he develops a very strong emotional bond to it. I’m not sure why the attachment to people isn’t as strong except for the fact that he lost his birth father (my 1st husband) when he was only four so maybe it’s a coping mechanism he developed? Regardless, today was not a good day.

My kiddo was given a duckling for Easter. He named it Esther and has raised it, and cared for it, and babied that duck every single day since. Obviously at this point Esther is a full grown duck so a little over a week ago we moved her and Princess (my daughters duck that she received at the same time) to the ditch out back so they could swim and forage as ducks do. They have been loving it and each evening my son goes to check on them before bed, and also first thing in the morning. Up until this morning everything had been fine. 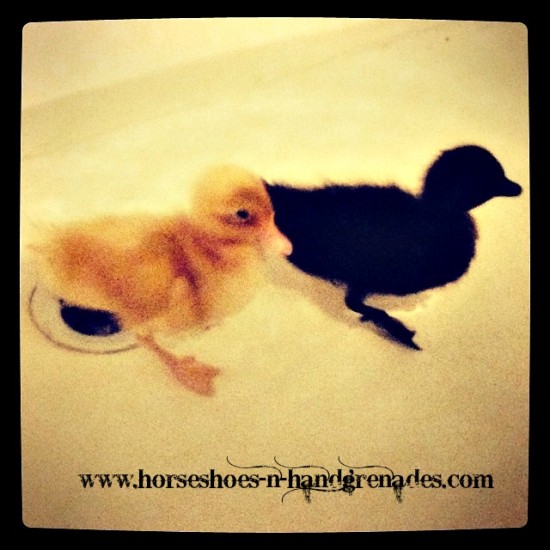 Esther (Black) & Princess (Yellow) Swimming in the Bathtub as ducklings.

This morning Princess was the only one that greeted my son when he went out. He thought maybe Esther was just busy swimming, but it was odd that the pair wasn’t together since that’s how they’ve traveled since they hatched. So, my son walked the ditch bank looking for Esther with Princess quacking behind him every step of the way. What he found was that Esther had met with foul play – a pile of black feathers at the entrance of what we have come to believe is a raccoon den. (We will be setting a live trap for the raccoon tonight since we’ve also lost a couple of chickens and a rooster lately.)

Catching the culprit though does not change the fact that my son is devastated – he understands that it’s part of life and living in the country, things like this are a possibility, but he is hurting today and there’s really nothing I can say to him to help make it better. To me the duck was a duck, and a lot of people probably think its much ado about nothing, but I realize she was much more than that to my child, it was Esther, his pet and his companion, and the fact that I can’t make his pain go away makes my heart hurt tremendously. (To be honest, I’m crying writing this – but there are some things that time must heal, no matter how bad mom wants to fix it.) I know that tomorrow he will feel a little better, and the day after that, but as for today…today just sucks.

How do you help your kiddos when they are hurting emotionally? Is it best to just let time do what it does best? Let me know your thoughts in the comments below and thanks for reading!

{I received a complimentary pair of Lysse Capris … END_OF_DOCUMENT_TOKEN_TO_BE_REPLACED

If you want to improve your blogging and help to … END_OF_DOCUMENT_TOKEN_TO_BE_REPLACED

Sooner or later, you’ll have to start planning for … END_OF_DOCUMENT_TOKEN_TO_BE_REPLACED

This post is brought to you by our sponsor, … END_OF_DOCUMENT_TOKEN_TO_BE_REPLACED